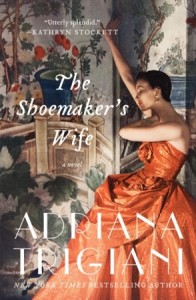 The Shoemaker’s Wife by Adriana Trigiani

Source:  Received from publisher for review

Ciro Lazzari and his brother Eduardo are brought to a convent in northern Italy in 1905 by their widowed mother who is no longer able to take care of them.  Ciro does maintenance and other physical chores around the convent, and when asked to travel to another town to dig a grave for some lira, he agrees.  The grave is for Enza Ravenelli’s baby sister, Stella, and it is at this somber place where the lives of these two characters become connected.

Of course, if it were that simple there wouldn’t be a novel.  Ciro heads back to the convent, but after witnessing an incident involving the local priest, he is forced to leave the only comfortable life he has known and is sent to America to apprentice under a shoemaker, a cousin of one of the nuns.  Enza, in turn, when her family has been evicted from their home, heads to America with her father in order to earn money for construction of a home the family may call their own.

A series of chance encounters in New York keep each in mind of the other, but like any modern romantic comedy there is always something coming between them – other suitors, perceived disinterest, etc.  However it is only after Ciro returns from having served the USA in World War I that he finally decides to fully declare his love for Enza; and just before she is about to marry another man.

Ok it’s not much of a spoiler to say that they do get together and get married.  And the rest of the novel is their continued pursuit of the American Dream while maintaining their ancestral heritage.

As I was reading this novel, I was enjoying it very much.  I loved the historical and geographical settings Adriana Trigiani described and despite the less glamorous aspects of much of it I completely wanted to go back in time and live in those times and in those places.  But, once I closed the book and thought about it, I had a few problems.  The early years of Ciro and Enza are extremely detailed and well described, but once they have married and set up their new life in Minnesota everything is fast-forwarded and certain things that I would have loved to read more about were only quickly addressed (I realize that this wish on my part would have likely made the book much too long).  As well, though the novel spans almost the entire first half of the 20th century, I don’t recall seeing any mention of the Great Depression, which given that the Lazzaris were in rural Minnesota probably had a significant impact.  World War II is only briefly touched upon; and though they lived in a community of immigrants I am surprised that there was not any anti-Italian sentiment shown.

But it’s just a novel, right?  And the story itself is worth reading, despite all of my little misgivings.

Judith at leeswammes recently reviewed this book as well, and please visit the other stops on  The Shoemaker’s Wife’s blog tour:

Tuesday, May 1st: Walking With Nora

Wednesday, May 2nd: I’m Booking It

Thursday, May 3rd: The Adventures of an Intrepid Reader